Saturday was a very special day in our house.  The Mother - Son Dance.

We have both been waiting a month for our very special date night.  Never...never in his whole life has Myles been ready and all dressed up before I was.  He took care in selecting his tie, shoes, and belt.  The whole look.  He patiently waited for me to get ready.  Never have I had my date watch Power Rangers while waiting for me to curl my hair.  Love it.

Ben took him that afternoon to get a rose to give to me.  He was so proud, but was sure to give some credit to his Dad.  They also took cash out, so that Myles could "pay" at  the restaurant.  Adorable.  Here are some pictures of the special evening...that ended in a big surprise......... 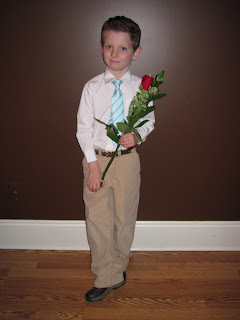 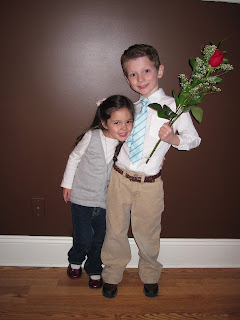 Jillian was begging to take some pictures with Myles.  This series of photos just crack me up.  She had a special date last night as well, with her Dad.  They had an amazing time.  Actually, one of my favorite moments of the night was receiving a text from Ben that read, "I love this little girl to death."  I'm so glad that Mama's girl has some special time with her Daddy. 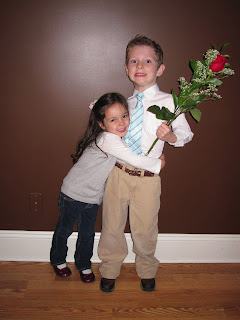 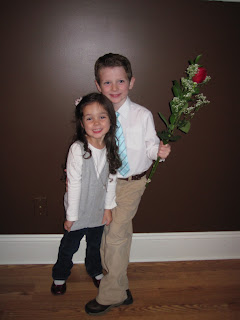 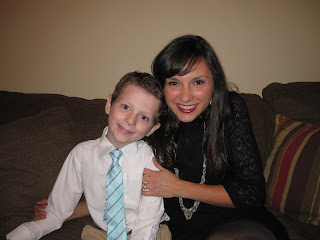 Me and my handsome date...ready to leave. 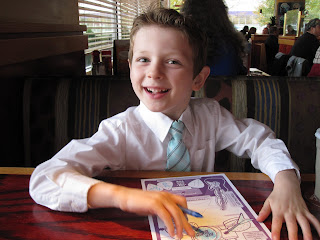 His pick for dinner...Red Robin.  It was extra special...he got to get a toy out of the gumball machine thingy at the front door. 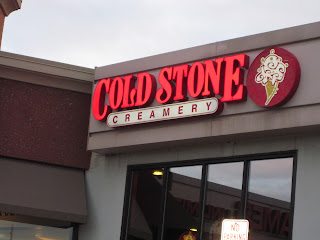 On to dessert.  He picked Cotton Candy ice cream with Kit Kat's in it.  Uhhhh...yum? 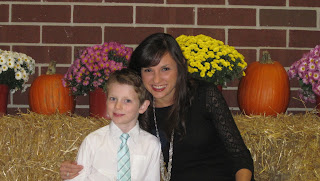 Our picture taken at the dance.  Yes, I cropped it.  My underwear were showing.  Classy. 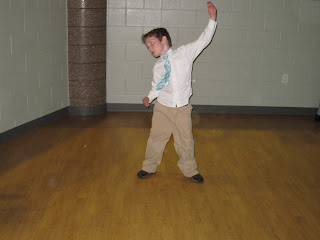 Myles busting a move....in his usual form.  This time, he had several friends with similar moves to back him up. 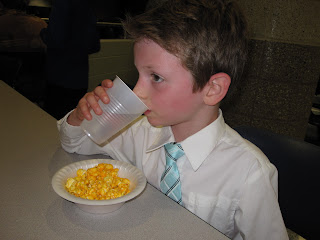 Refreshment breaks were key.  Can you see how red and sweaty he is?!? 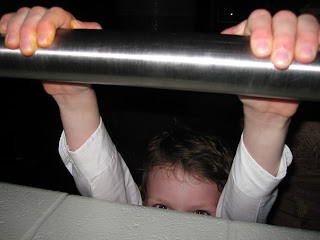 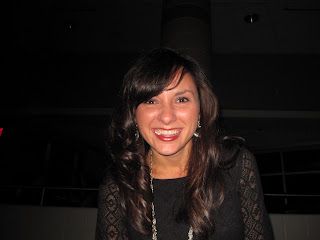 Myles wanted a turn behind the camera and took this picture on the dance floor.  It was right after the last slow dance - where Myles whipped and swung me around.  We need a lesson on slow dancing.  Anyway, I decided to pick him up. (Which was probably hilarious to see...I think his legs were hanging past my knees.)  After the song ended, it was time for the big announcement...the winners of the BIKE giveaway!  He had not even noticed the door prizes.  He was way too busy with his friends.  As soon as I set him down, he started to run away to his buddies so I yelled after him, "Come back!  Let's see if your ticket is the winner for the bike!"  I immediately regretted even saying it.  I could see the excitement in his eyes.  "You mean I could win a BIKE!!!"  Crap.  Now I got his hopes up, only to likely crash in about thirty seconds.  I try to backpedal and say, "Well, there are a lot of kids here, so probably not...but stay here so we can check."  They start calling numbers.  I am reading the tickets and every. single. number. is called.  He won.  I look at him and say..."Myles!  You won buddy!!  You WON!!"  The excitement for him was...amazing. 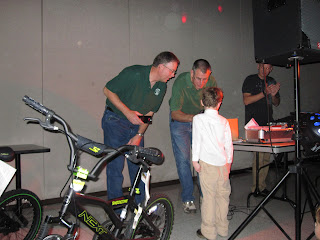 Telling them his name over the loud speaker. 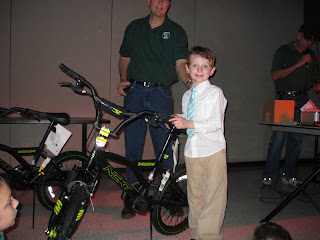 Posing for a picture with his new bike. 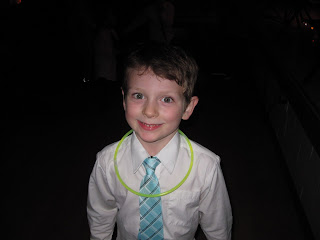 Thrilled is an understatement.  He slept with it in his room.

Posted by Nicole @ Pencil Skirts and Noodle Necklaces at 9:23 PM