The Big Leagues on the Tee-Ball Field 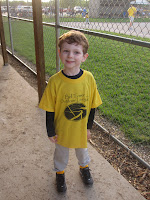 It is such a snowy day today…a perfect day to sign up for Little League, right?  Of course!  It reminds us that just around the corner we will have be having rainy practices, grass-stained baseball pants, and of course, super excited tee-ball players.
Myles played his first year of tee-ball last year and he loved it.  He still wears his participation medal around when he is feeling like an ego boost.  Definitely something to be proud of for a five year old! 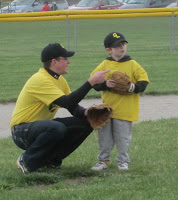 As a mom, nothing was more fun than tee-ball.  I could watch my son do something he loved, my husband helping the little players along, and my family (lots of us) cheering on the little Bulldogs.
Myles was not the best player on the field, but his excitement level was definitely up there.  That is what it is all about at 4 years old, right?  He loved to bat, run, and field the ball.  Occasionally, he would “drift off” while playing in the field (not always baseball).  The dirt, grass, glove, or any other distraction could easily take his attention from the game.  My favorite play of the season?  Myles laying on his back in the grass while Coach Ben looked for him.  I had to point out where he was…  He just wasn’t looking low enough to find him.﻿ 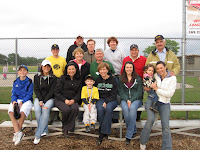 Myles always had a huge cheering section.  When he was up to bat, we would try to wait and cheer until after he hit the ball, so he wouldn’t run to the fences to entertain his fans.  Always a social guy, many runs through home plate headed straight to the backstop to chat with the family.  “Myles! Grab a bat and go to the dugout!!”  He is already worried about the cheerleading section for this year.  He prefers Jillian to wear her cheerleading outfit for each of his games.  It’s just more official that way.﻿﻿

One stormy night, we weren’t sure if we would be able to get the whole game in, but the game began anyway.  Myles was first up to bat.  With one swift swing, he hit the ball and ran straight to first.  A few seconds after he got to the bag, the first flash of lightning lit up the sky.  The coaches had to call the game, but not until Myles ran the rest of the bases.  A single home run won that game in the eyes of a five year old.  It is something he is going to remember for a long time.
I find it hilarious that the best part of the game for most of the boys is the snack.  A juicebox and a rice krispie treat never tastes as good as does on a ball diamond.  We don’t keep score, so as long as there is a snack, everybody is a winner! 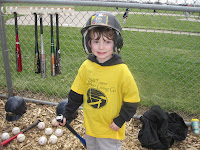 By the end of the season Myles had learned so much. He was able to hit a pitched ball (no tee), field a ball and throw it to first base, and most importantly, had gained many new friends.  Today the sign up for tee-ball was exciting.  I look forward to fun with friends, family, and most of all…watching 4-6 year olds play out their big league visions on the tee-ball field.

Posted by Nicole @ Pencil Skirts and Noodle Necklaces at 5:13 PM