You know, every once in a while, something spurs that feeling...  That feeling that your children are growing up...right before your eyes...becoming the young people they are destined to be.  It may be watching a three year old doing something brave that she has never done before.  It may be witnessing your five year old telling his grandfather the reason why we celebrate the Fourth of July.  Any number of things can trigger that feeling that feels somewhere between nostalgia and pride.  They are growing up. 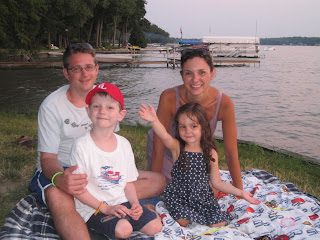 Today, the feeling found me square in face sitting in the pew during church.  When we walked in the door, we were approached by one of the ushers asking if we wanted to take up the gifts.  This includes carrying the bread and wine for communion, along with the offering, up to the alter.  When asked, I looked to Myles and Jillian to see their response.  They were both nodding in agreement that they wanted to do it.

When the time came, both kids carried the item they were responsible for with pride.  They walked with confidence as the entire church looked at us, together as a family, presenting the gifts.  After kneeling, both kids walked back to our seats with huge smiling faces.  They were proud of themselves.  I was proud of them.

I find myself with this feeling almost daily now.  Maybe it is their ages - at three and five, they are on the brink of school and gaining independence daily.  Everyone says that your children grow up so fast. It is almost cliche.  Yet, it is so true.  It seems every day now the kids are doing something new, telling me something that they learned, or showing me a side to their personality that I have not yet seen.  Jillian has departed from her emotional outbursts when things are not going her way.  Now, she will quietly walk away and sit alone pouting, until she recovers and returns to whatever she was doing.  Where did she learn this?  I have no idea.  It is a new facet to Jillian I am learning about.  I'm not complaining...I will take sulking over yelling any day of the week.  She is growing up.

I cherish all of the memories of younger versions of my children...like when Myles used to refer to cars as "gos" or when Jillian would refer to her favorite food as "'froni and cheese."  Yet, each day as I see them making choices and becoming themselves, I also cherish being a guide and witness to the changes they are experiencing.  I love having a front seat to the show...of them growing up.

Posted by Nicole @ Pencil Skirts and Noodle Necklaces at 11:01 AM