Pretty much every night (with the exception of a night that we are having just way too much fun) I go running.  It is a minimum of a half-hour that I can dedicate to just myself.  I am completely alone in my head and I can think through things.  I guess it is kind of selfish that I put such a high priority on going out each night....but at least I typically wait for the kiddies to go to bed and I hit the road.  Honestly, I think Ben likes it that I go each night.  I always come home in a great mood...  You can read more about how I feel about running here.

Myles admires my running.  He always likes to know what race I am training for or how far I am going to run each night.  He talks about how cool it is and that he wants to go running with me sometime.  He plans to run a 5K next year, "When he is big."  So, tonight he asked me at the dinner table if he could go running with me.  Ben, protective of my sacred time, started telling him right away, "Buddy, Mom runs really far and really fast and I think it would be hard for you to go."  It was awesome to say YES.  Of course he could go with me.  My time was his time tonight. 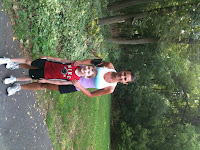 So, instead of waiting until later into the evening, we went upstairs after dinner to get our running clothes on.  He was very specific about what he wanted to wear...sleeveless, nike, and his "tennus shoes".  He wanted to look just like me.  Had I thought through the fact that Ben would whip out his iPhone and take a picture, I may have opted for something other than this running tank circa 2002.  Oh-well.

Off we went.  His pace.  His conversation.  He talked the whole way.  His little legs were moving so fast and his arms were pumping as fast as they could.  His little cross-trainers were stomping on the pavement, every step he took.  Every single neighbor we saw he yelled, "HI!!!!  I'm going running for the first time with my mom!!!  She always goes running, but this time I'm going toooooo!!!"  It was like a script he prepared for each person he encountered.  We talked about running, races, animals, the lake, getting big, his wiggly teeth that are close to coming out...you name it, he covered it.  We ran a quick lake loop that totaled somewhere a bit over a mile.  He walked a little bit, but I don't know that it was actually because he was too tired.  I think he just wanted to walk and talk along the lake. 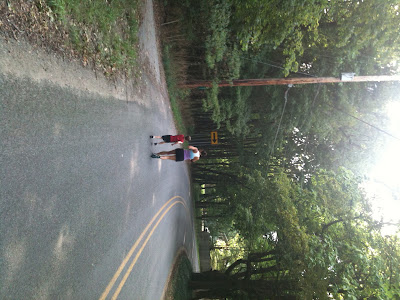 It was the best run I've ever had.
Posted by Nicole @ Pencil Skirts and Noodle Necklaces at 8:06 PM