Official Start to the Holiday Season!

Every year we go to Chicago for the kick-off of the holiday season.  It has become one of those holiday traditions that my kids have come to expect.  I love that.  The weekend before Thanksgiving every year, Chicago hosts the Disney Lighting Parade.  We love it.  We tend to fill the weekend with a visit with Santa, yummy food, shopping, and fun family times.  Could you ask for a better way to kick off the holidays?  I don't think so!

Here are some pictures of a few of the highlights... 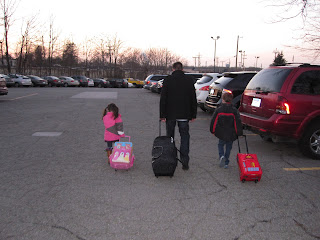 This year, we ventured on the train on the way to Chicago.  The kids love pulling their own bags.  Myles got quite a bit of attention at Millennium station.  His McQueen car suitcase was quite the hit...and he was quite proud.  Jillian was sure to confirm that they also saw her princess suitcase. 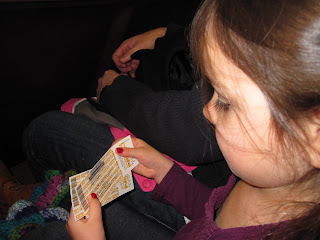 Jillian with our tickets.  The train ride was fun for them...for the first twenty minutes, anyway.  We had pizza and grandparents waiting for us in Chicago...definitely worth it! 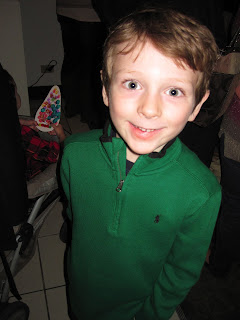 The next day we went to Macy's on State Street to visit Santa.  He must be the real one, since he is in Chicago at the biggest department store in the Midwest, right?  Well, this year, we shopped for Christmas attire at Macy's and changed into their new clothes right at the store.  We needed to look our best for Santa! 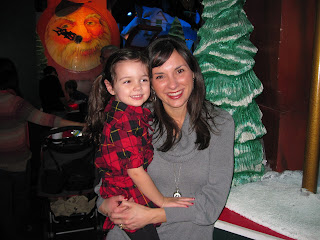 This is Jillian and I waiting our "25 minute" wait to see the big man with the beard.  The wait was more like an hour and a half.  It felt a bit like a holiday movie.  Kids crying, runny noses, whining, irritated parents carrying their kids sideways out of the line...the whole bit.  Luckily, our kids were patient. (Definitely more so than the adults!) 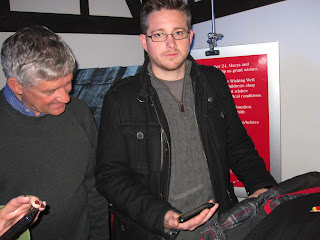 Ben and Dad watching MSU vs. Northwestern on his phone.  Can you see his enthusiasm? 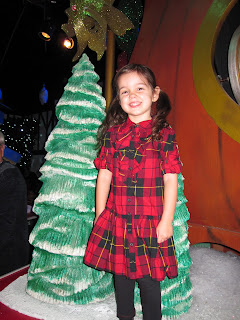 Jillian posing by the scenery that you were not allowed to stand on.  Oh-well.  What else are we supposed to do trapped in a labyrinth of Santa drenched aisles leading to the chubby jolly guy in the red suit? 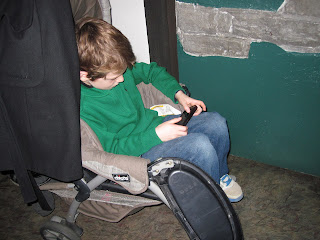 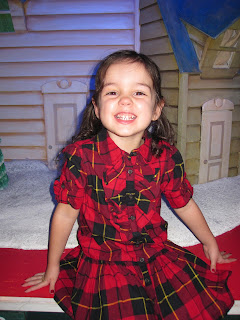 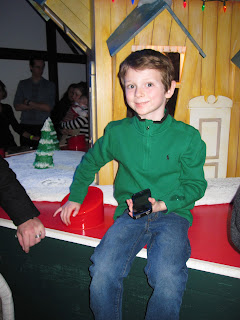 Getting closer...but STILL in line. 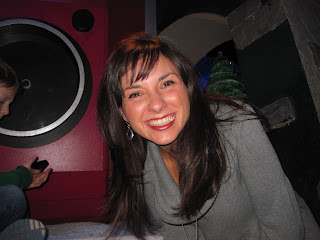 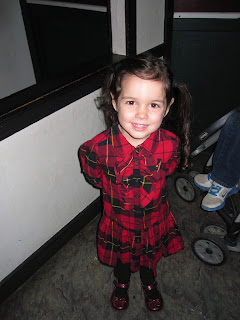 We could actually see the door at this point! 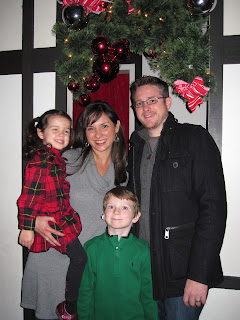 Better take a picture to commemorate. 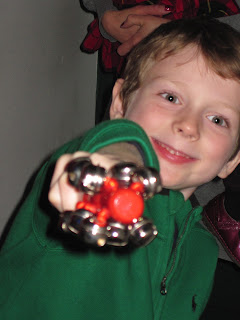 Myles and Jillian got these awesome jingle bells in holiday gift bags awaiting our arrival at the condo (from their Nana and Papa).  They were the official sound of our trip.  Jingle, jingle. 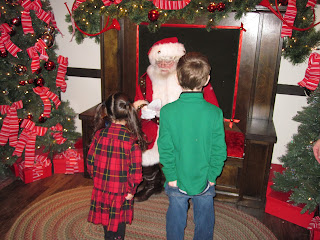 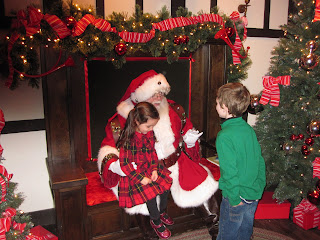 I specifically remember he was telling the kids that they have been so good and they should try their best to be very good every day. 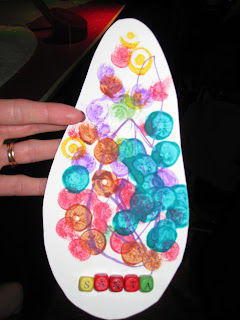 Last week, Jillian made this Santa artwork to take to Chicago with us.  She carefully packed it in her bag and reminded everyone that she needed to take it with us when we left for Macy's.  We never told her that the first "A" in SANTA fell off in line and we re-attached it with my mother-in-law's gum.  Santa loved it nevertheless and thanked "Joann" profusely.  Jillian didn't seem to notice that he misnamed her.  Star-struck? 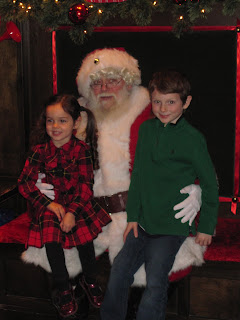 So happy and excited! 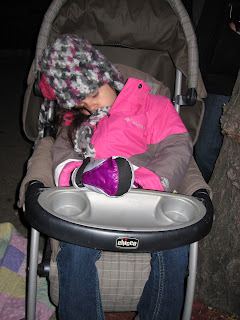 Time for the parade!  The long day had exhausted Jillian. 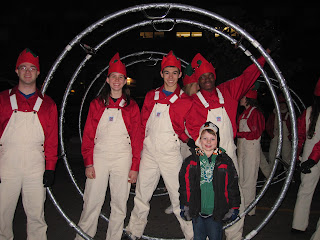 Myles posing with the elves from the parade.  We minimize our exposure to the million (literally) people that turn out for it by watching the parade from the street that the floats go down to arrive at Michigan Avenue....Oak Street.  That's an awesome insider trick I just gave you!  So, while the elves prepared for the parade to start, we got a quick pic! 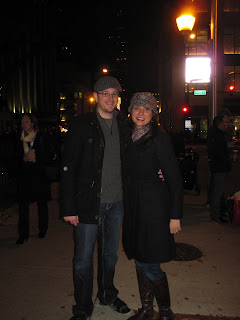 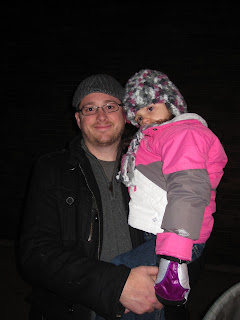 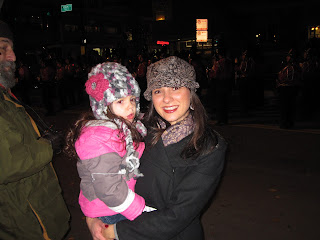 She eventually perked right up. 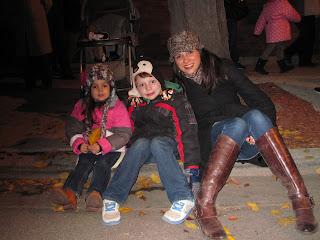 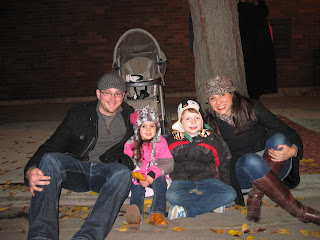 All of my lovies. 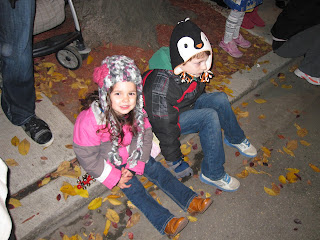 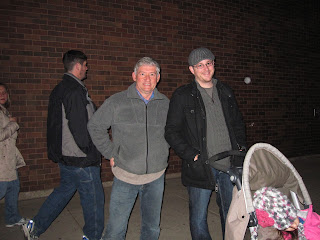 Not pictured in this weekend of photos...our dinner and game night at Dave and Buster's.  Let's just say it doesn't qualify as a "highlight".  Don't get me wrong...the food was decent...the games were fun.  It was just those stinkin' prizes.  We waited about 45 minutes to get our crappy trinkets.  The people in front of me (who cut) had a kid puke right in line.  They stayed the course for their junky plastic mini-frisbees and bubbles anyway.  Awesome.  Our kids still had the time of their life.  Worth it.  Good thing it will be another year before we might "need" to go there again.

Email ThisBlogThis!Share to TwitterShare to FacebookShare to Pinterest
Labels: Family, Mom Stuff, This and That