Maybe it's the snow and cold…maybe it's the insane level of nesting urges that I have been experiencing…or maybe it's the sweet friend who wrote to me and told me that she has been reading old posts…  Any way you look at it, this little corner of the internet has been on my mind.  Time to clank a post out on the keys tonight.

Christmas has officially left our home and has been replaced by baby nesting craziness.  Each year I feel a pang of nostalgia as I pack each ornament away, knowing I won't see them again for a whole year.  Especially this year, my mind was racing as I was thinking how different our life will be the next time I am taking our stockings out of their bin (especially after purchasing a new one to match Myles and Jillian's that will be used for the first time next year), or my favorite "Get in touch with your inner elf" sign.  Yet, the super clean, simple homeyness after the decorations are all packed up always wipes away that sad feeling.  Fresh and clean.  Ready to start the new year.

This year, after the decorations were put away, Jillian and I went into super-nesting-prep-for-baby-mode.  Before this crazy prep session, by looking at our house, you would have never known I was eight and a half months pregnant.  Unlike with the first baby, we did not have a nursery set up and waiting five months before the baby's arrival.  There was literally not a single sign of a baby in our house (unless you count American Girl paraphernalia in Jillian's room). 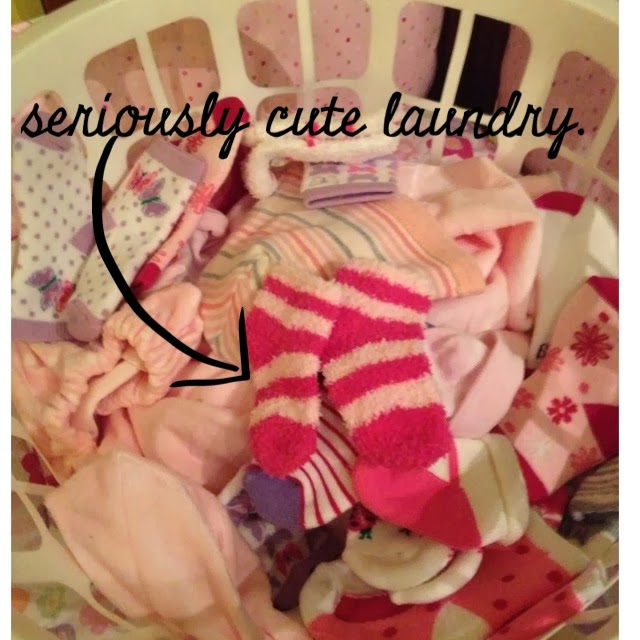 I couldn't believe Jillian's extreme motivation in this baby prep initiative.  She wanted everything ready for her sister, and frankly, she wasn't real interested in her mother taking occasional breaks.  "We gotta get this DONE MOM!!"  Sorting through her old clothes...setting up the crib…washing baby socks and hats in Dreft…all of it.  She was the driver, the motivator, and frankly, the pusher.  She was successful.  We are officially ready to bring home a baby whenever she decides to show up.  Myles wasn't exactly interested in helping…although during the prep he did inform me that he is hoping that I will be busy when the baby is born and he will be able to play video games whenever he wants to.

So, now we are left to waiting (and deciding on a middle name).  I'll tell you, there are many things that I have found different about this pregnancy than the others.  Many are probably simply due to the fact that I am older…  Yet, there is one more recent observation that I have to simply attribute to the fact that this is the third time my belly has ever been this big.  You know those weird pictures that you can see a baby's hand or footprint clearly through the mother's belly?  Like this?  Well, it has been proven the photos are doctored, but seriously, I feel like this is reality to me.  It seems like there is hardly anything between her and my skin.  I can make out body parts with ease and frankly, Ben can spot them across the couch.  So odd, yet so amazing.  So, we are on to weekly doctor visits and praying that I don't have another 10 pound baby (okay, she was a half an ounce shy - but she poo'd in utero, so I say it counts).  I prefer to deliver a newborn (not a two-month-old) if possible.  Here's hoping!
Posted by Nicole @ Pencil Skirts and Noodle Necklaces at 10:16 PM