You have met everyone in our family, except our furriest member that walks on all fours…Wilson. 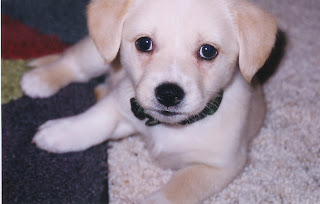 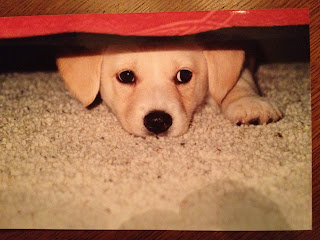 We adopted Wilson during a pet adoption drive.  He was the only blonde puppy in what looked like a litter of tiny labs.  They were only five weeks old and were cute as can be.  As soon as we saw him, we knew we had to have him.  We weren’t ready for kids, but we could handle a puppy.  A couple hundred dollars later, we left with all of the “accessories” for our tiny ball of fur.  We brought him home to our new house and shortly began to understand a bit about caring for another creature and loving it so much. 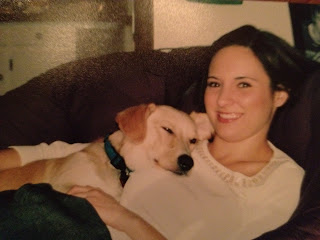 I loved Wilson.  I did anything for him.  I remember sleeping with him on the floor after he had his little boy doggy surgery.  He was my roller-blading partner (this gives you a clue to how old he is…does anybody roller-blade around the neighborhood anymore?  He is eight and a half).  We would watch TV cuddled up together.  He chewed up my shoe?  No problem, he is a puppy and he could do no wrong.  We took him to obedience school and he became a star student.  We were proud parents.
I remember sitting on the stairs of our first house petting him and talking to him.  He was still a puppy, but he was getting bigger.  I was telling him not to grow up.  I liked him just the way he was.  He did just that.  Our lab / border collie mix never grew taller than 18 inches.  He still, at a doggy age approaching sixty, looks like a lab puppy to me.
Onward to Chicago and our condo search downtown was limited to condos that allowed dogs.  Wilson needed to love our condo as much as we did.  He braved the big city and loved to take walks.  He was top dog of Chicago, as soon as he got used to peeing in a dog run.
Back to Kalamazoo, Wilson made the move back home and gained a “brother” when Myles was born.  I remember crying when I was pregnant that Wilson would be sad when Myles was born (I cried at commercials too).  He wouldn’t be our little boy anymore.  We brought home our brand new blue bundle and I was thrilled that Wilson was protective and curious of Myles from the beginning.  He was very good around him.  A crawling baby pulling on his ears, tail, trying to ride his back… it didn’t matter.  Wilson was so gentle with Myles.  Yet, my sadness during pregnancy wasn’t unwarranted.  My fears came true.  Friends had warned me that it would happen, I just didn’t believe them.  Despite my attempts, Wilson became a dog.  I still loved him and cared for him, but he wasn’t my “son” anymore.  He was our dog.  It was the first time that he actually had non-human status in our house.  My television evenings were spent bouncing a baby on an exercise ball, instead of petting Wilson.  When I came home from work, despite Wilson jumping at my feet, I ran to greet Myles first. 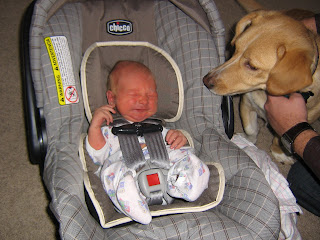 Fast forward a few more years and we were bringing Jillian home from the hospital.  Now there were two human siblings for Wilson to “compete” with for attention.  A screaming baby or preschooler yelling to go potty always trumped the little blond furry friend.  Don’t get me wrong, we still loved him, but when all is quiet in the house, the dishes, laundry, or other household duties were always calling.  I found that less and less of my time was spent petting and playing with Wilson.  Myles was old enough to play with him and they would spend time chasing balls and each other during the day.  I could rationalize that at least someone was playing with him.  Of course, Wilson could always find a way to make me play with him.  A snagged baby toy and the chase is on.  It still happens sometimes today.  I have to put on my man voice to get it from him.
Today, Myles and Ben attacked me and started a tickle fight.  As I yelled and yelled for Jillian to come to my rescue, Wilson came running like my knight in shining armor.  Playfully, he growled and nuzzled the boys, trying to free his mom.  It worked.  They turned on him and started wrestling on the floor.  It made me think…  Wilson is not unhappy with his dog status in our family.  He is one of us and even though it sounds weird, I think he gets it. ﻿﻿

When I think of Wilson, I just smile.  He has been with us for the majority of our marriage.  He has lived through all of the major events of our lives…the great times, the terrible times, and everything in between.  The kids love playing with Wilson and I really would be hard pressed to find another dog that would be so gentle with our kids.  As he has gotten older, he has slowed down quite a bit.  He isn’t the best running partner anymore (let alone roller-blader).  Now, he is more suited for a walk and the kids love taking him out as much and he does.  He will always be special to us.  He was the first creature (other than fish) that Ben and I raised.  He turned out pretty well if you ask me.  Wilson, my dog, this one is for you! 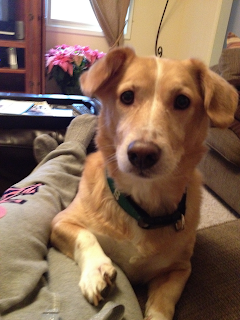 Posted by Nicole @ Pencil Skirts and Noodle Necklaces at 8:55 PM

Email ThisBlogThis!Share to TwitterShare to FacebookShare to Pinterest
Labels: Family, This and That