Confession time.  Part two.  I had a handful of Peanut M&Ms today.  A big handful.  I also had a breadstick today (or maybe two, but who is counting).  What happened to my no sugar, no carbs vow?  I'll tell you what happened... 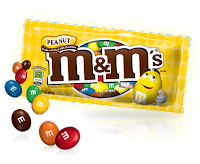 In late February, my doctor told me I had "sugar issues".  You can read all about it here.  I made an immediate change to my diet.  If food had any carbs in it, it wasn't going in my mouth.  I had willpower of steel.  Honestly, I think I was actually just afraid to eat anything that had carbs in it.  I think my doctor did a great job explaining why I couldn't have anything good ever again.  It was the first time a doctor ever told me I had to change my lifestyle.  My Type-A personality was all over wanting to please her.  Fairly quickly, I adjusted to my new eating habits.  I had lost a few pounds and felt good.  I didn't even really miss sweets.  I had a different outlook on food altogether.  It wasn't about how it tasted.  It was just about re-fueling my body.

Then it happened.  Easter.  Maybe I should just drop the "s" and call it Eater.  I cheated.  I ate a few candies and some good food at dinner.  That night my stomach definitely did not feel great.  I just wasn't used to carbs anymore.  Yet, nothing major happened.  No alarms went off.  I didn't instantly gain ten pounds.  I didn't even get shaky from the sugar.  Nothing really happened, except for a bit of a stomachache.  I had been so scared about all of the changes I needed to make leaving the doctor that week back in February.  Yet, when I cheated, it appeared to be no big deal.  I'm not sure what I had been scared of the whole time, but I realized the effects of the sugar were not immediately apparent (at least on the outside).  Thus, the cheating began...

...And it has continued.  I don't have my blood sugar checked all that often and I know when it's coming.  So...I have been eating pizza again.  I have even had some french fries during some late night painting projects.  I'm not sure I even feel all that bad about it.  Sure, I know I shouldn't, but geez, the doctor didn't even diagnose me as a true diabetic.  Borderline is borderline.  That means I can enjoy a piece of pizza here and there, if you ask me.  Shoot, maybe it even means I should have carbs sometimes while I still can!

All kidding aside, I know I need to get back on the bandwagon.  It is the healthy thing to do.  I don't want to be a full diabetic and I need to regulate my sugar myself if my body doesn't want to do it for me.  Perhaps admitting and confessing my transgressions to you will help me get back on track...  I hope so.  I also hope my doctor doesn't read this....the pizza I ate...wasn't even wheat crust!  Neither were those M&Ms.  They were good though!

I will get back on track and I'll keep you posted.  I'll start again asap...probably tomorrow.

Posted by Nicole @ Pencil Skirts and Noodle Necklaces at 6:05 PM

Email ThisBlogThis!Share to TwitterShare to FacebookShare to Pinterest
Labels: diet, sugar, This and That