So…Friday night was Brooke’s bridal shower.  My house, her friends, drinks, hor’dourves, presents, and one wacky game…made for a fun night.  Let’s review in photos… 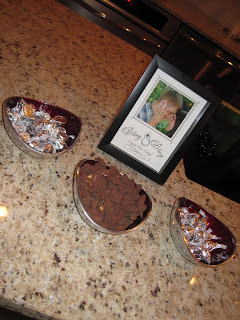 I totally raided Brooke's bedroom the night before the shower.  She didn't even notice.  I was able to have pictures and memorabilia for some of the decorations.  They were free...and meaningful to her.

Some other decorations that I had included these two banners reading "i do" and "love".  They are made from black glittered letters affixed to weathered (water, crumple, dry in the sun, and repeat) paper bag cut outs.  They hang from hemp.  I love how they turned out.  Brooke thinks she might use them at the wedding.  After that...I think I might even hang the "love" banner above my bed. 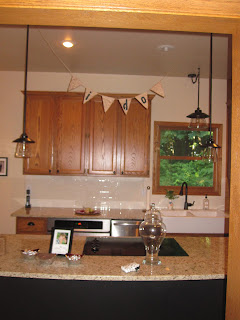 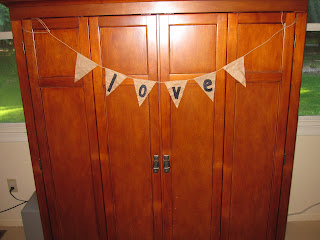 I’ve never been one to take pictures of food…but just for you…I did. 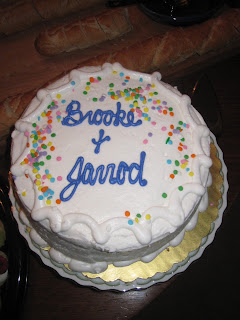 The cake.  Honestly, nothing special.  I had big dreams for the cake, but the cake decorator disappointed me.  Oh-well.  I was told it tasted good.  That's all that matters, right? 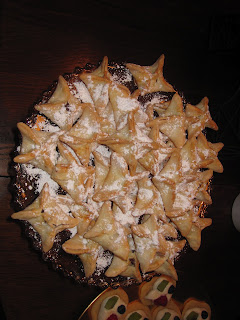 Kiss pies.  They turned out pretty well and most of them were gone...always a good sign.  No matter how I tried to press them, they looked Asian.  The effort was there at least.  Thanks for the recipe, Pinterest. 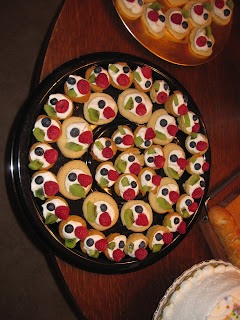 Mini Fruit Cups.  Okay, I am going to be brutally honest.  This recipe sucked.  Sorry fellow pinterest post-er.  I was spewing words not appropriate for all ears at 11:30 Thursday night when the sugar cookie cups were not able to just “pop out of the muffin tin.”  I was ticked.  I’m sure it was just my baking inadequacies, but after cooking all day – I wasn’t in the mood for it.  I was getting four to a pan of twelve…and those four were surgically removed with a fork, knife and spoon.  Ridiculous!  Ben eventually asked me to move on to making regular sugar cookies.  Good decision.  Then, the next day – I needed to make the filling.  The recipe called for a tub of cool whip and a package of cream cheese.  Well, it wasn’t very good.  I ended up concocting my own recipe by adding some powered sugar, real vanilla, and milk to the recipe.  In the end, I could never duplicate it, but that’s the way it is for 95% of my recipes anyway!  They were good.  Next time, I'll just make the cookies flat. 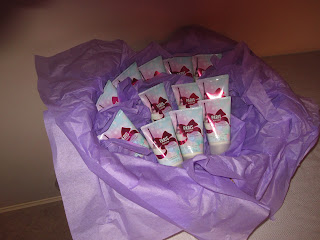 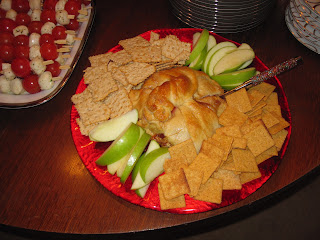 Baked brie.  I make it all the time and as usual, it proved to be a success.  I couldn't believe with a group of 22-23 year olds, it was the first thing gone. 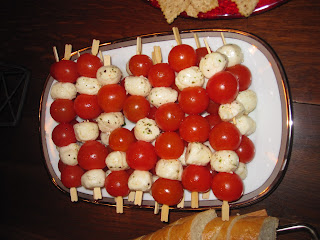 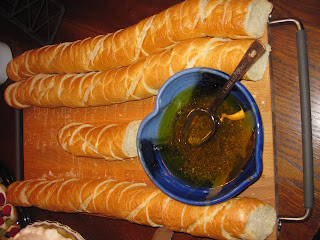 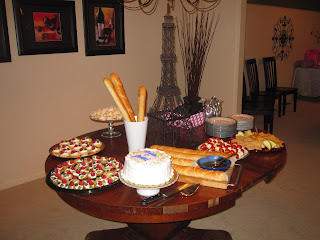 A look at the food table. 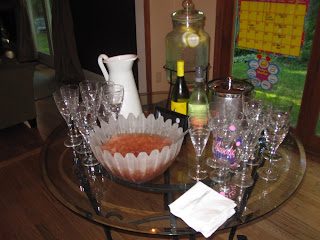 Drinks, anyone?  Wine, Sangria, and a wine punch.  All were a success and mostly finished.  Surprise! 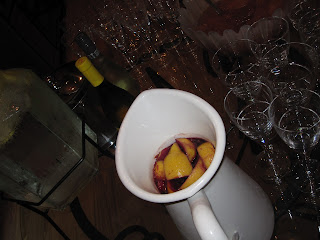 So yeah, the food is important...but bridal shower games are always such a drag...  I had a shower ten years ago that had this amazing idea for a game (from an amazingly witty woman)...so quite frankly, I copied it and passed the fun onto my guests Friday night.

Here is a run down of the game (I SO wish I had pictures - but that would have given me away)...

I asked a friend from work, Terri, who was simply perfect for this acting role, to come and crash the party.  So, after everyone was settled into our family room, happily eating and chatting...in barges Terri...in a tizzy!  A hot mess, she walks right in apologizing for being late and is all flustered carrying baby shower balloons and a huge purse.  I asked Brooke to please introduce her guest...who she of course DOES NOT KNOW!!  She asks Terri if she is going to a baby shower...  It appears that Terri has the wrong address and decides to dump her entire purse on the floor in search of the invitation.  Let's just say she had a few questionable items in her purse.  Frantically, she gathers all of her belongings back into to her purse and rushes out the door.

It took a few minutes for the buzz of the room to calm.  They just could not believe that crazy woman just did what she did!  And - there you have the game.  Whoever identified the most items from her scattered purse items...won.  It was a blast and a fun twist on traditional shower games.  I would do it again in a heartbeat.  Too bad I just gave up my gig to everyone I know!

Posted by Nicole @ Pencil Skirts and Noodle Necklaces at 8:54 PM

Email ThisBlogThis!Share to TwitterShare to FacebookShare to Pinterest
Labels: Family, Mom Stuff, This and That